A team of 7 from the North West Federation played the Australians (the Mac team plus Greg and Malcolm) at Southport this week. The lawns at Southport were in good condition, though quite green and easy after all the recent rain. The day started well for the NW Fed with two wins in the doubles, but the Australians began to assert themselves in the afternoon singles. The star performance from the NW Fed was Dave Nick, with a win in the doubles and 3 wins in the singles against Stephen Forster, Ian Dumergue and Greg Fletcher.  Southport provided an excellent lunch and afternoon tea, which were enjoyed by all the players and about 30 spectators. By the end of the day Australia were leading 19-6.

On Day 2, Australia cemented their overnight lead and won overall 29-11. Many thanks to the Southport Club for their very kind hospitality.

The 2010 Bowdon June Advanced Weekend was won by David Maugham who beat James Hopgood in the final (+26tp, +15tp, +26tp). James had played well to beat Ian Lines in the semi-final, and hence earn his CA Silver Medal for getting to his first final in a 16 player knockout in a first class level singles event. The consolation Egyptian Event was won for the second year in a row by David Walters, who beat David Mooney in a closely contested final game.

The Peterson Trophy was presented to David Maugham by John Saxby, and thanks were recorded to Alan Mayne for the excellent lawns, Barry Keen and Colin Irwin for setting the hoops, and to John Saxby and his team of helpers who provided the magnificent catering.

The Bowdon lawns on Saturday were just becoming interesting at about 11.5 Plummers in the sunshine, and with hoops firmly set at 1/50″ there was a reasonable level of interactivity in most games, although breaks and tps were still relatively easy once established. Unfortunately, overnight rain made the lawns and hoops comparatively easy on Sunday. 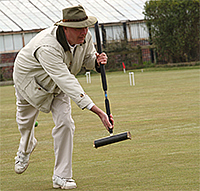 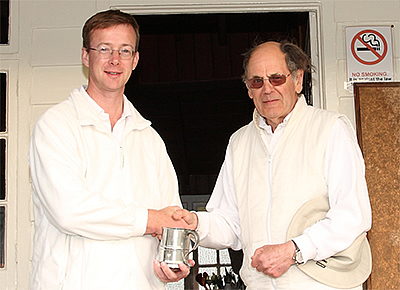 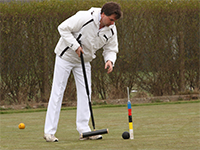 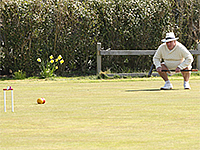