You are here: Home / Archives for Croquet Association

The Croquet Association have been working on plans to change the membership structure of the CA for some time – this will simplify the system and most importantly, include every club member for the first time.

From 2017, the membership structure will be changing dramatically:
STANDARD MEMBER – free to all club members who are then eligible to enter tournaments, will receive the Croquet Gazette and get voting rights.  This will happen automatically provided the new Membership Database (currently in development) goes live.
PREMIUM MEMBER – £40 pa – get priority discounted tournament entry, plus the Gazette and voting rights.
SUPPORTER MEMBER – £20 pa – means of supporting the CA but do not wish to play in tournaments.
CLUB LEVY – £10.50 – payable by all clubs for each of their members.

The following article on this topic is taken from the September issue of the Croquet Gazette: 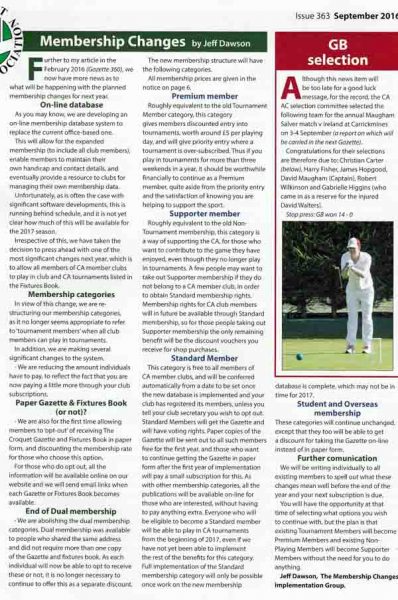 Phill Nuttall (Bury) wins with Will Mellor (Bowdon) also qualifying for the National Final.  Most of the Regional finalists all gathered at the ‘right’ Bury Venue and Round one got fully underway by 9:30 but the manager had to slot himself into the draw to even up the numbers…

Round two was started before lunch to try to get ahead of the darkening skies and forecasted deluge. In it, Paul was quickly despatched so was soon able to assist Bury Chairman (Paul Kenworthy) in his valiant effort of trying to keep the courts puddle free as the heavy rain duly arrived. The players headed for cover and dined (manager’s special) and then sat inside and sheltered some more as the surface succumbed to the elements. Play was abandoned for the day with most of R2 still to play – a new experience for the assembled, they now know how to fill in ‘Pegging Down Sheets’.

Sunday; Clear n Sunny.  The Chair cleared surface water again as the manager reset the courts – special mention must be made of Bury member Helena Nuttall, who turned up unbidden and tended to the contestants breakfast needs while the surface was thus prepped for an early start – very helpful!  Round three started before lunch with the manager having to reduce the game time limit in order to try and catch up.

After R4 we had a clear favourite but who would grab the second spot at Hamptworth, at least four were still in with a shout.  R5..what to write about R5? erm…Sunset was 19:50 but the last hoop attempt in the very last game was at 21:06! How? Flood lights were utilized of course!

Fortunately for the manager, there were no ties to resolve and both places were awarded to the only two gents who achieved 4/5. Phil taking the top spot because he ‘did’ Will in R3. As well as receiving their invitation to the All England, both candidates had their Hcp cards ‘adjusted ’ by the tournament handicapper.

The presentation and photos were made by the Chair who had been in constant attendance for the whole weekend (he also did the lunch on Sunday with his better half), very industrious.  The entire field must be thanked for their patience and hard work – it *is* possible to run the regional final in a single day (almost) with the dedication displayed over the weekend.

With the forthcoming changes taking place in CA membership, our North West Federation Constitution requires amendments. Rather than make piecemeal amendments, Chairman Garry Wilson, with Graham Good, produced a new draft constitution last March.  After receipt of members views, Garry has now drafted a second draft which will be discussed and voted on at the November AGM.

This new Constitution is felt to be more democratic and more compatible with other Federation Constitutions. It also clarifies the criteria regarding Motions at the Federation club meetings.

Should you have any comments or questions, please email Garry at: garry.wilson@vodafoneemail.co.uk

You can read or download the proposed new Constitution here.

You can read or download the existing Constitution here.