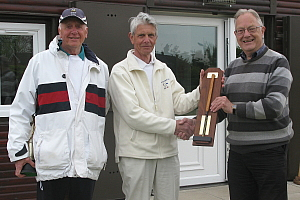 The overall winner of the competition was David Boyd of Chester who succeeded in winning four out of his five games, the final one against Paul Kenworthy (Bury) with a tense, nail-biting lead of just a single hoop when time was called. The winner of the secondary competition  was Steve Reynolds (Bowdon) who also won four out of his five games. Three others won three of their games.

The event was organised by the Secretary of Chester Croquet Club, Janet Davies, and Elmyr Hughes managed the competition over the two days. David Guyton, the Chairman of Chester Croquet Club, thanked all the participants and members of the club who helped with the catering and organising the event and presented trophies to the winner and runner up at the end of the tournament on Sunday afternoon.