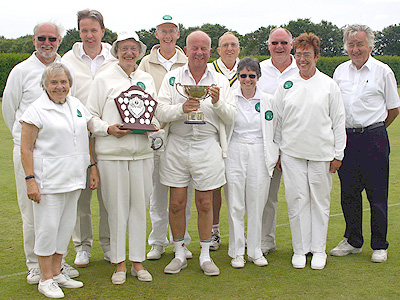 Congratulations to Bury Croquet Club on winning the North West Federation Chamipionship at Southport on 2/3 July 05.

Twenty teams from clubs in the Northwest Federation enjoyed an excellent weekend of croquet competing in the club championships held at Southport on 2/3 July 2005. Play started at 9am each morning to allow the games to be completed by 5pm on Sunday. The southport weather was warm and sunny, the food good, with the atmosphere and sociability first class. Barry Keen expertly managed the event. There were competitions to organise in four disciplines, golf, short, association handicap and advanced.

Bury won the Advanced event, Southport won the Handicap, Fylde won the Short and Culcheth won the golf event. When all points were aggregated, Bury emerged as the Champion Club.

The club championship is an excellent way to meet players from across the region as well as introduce new players into the tournament scene. Many start with golf, progress to short and a couple of years later will be playing full lawn association handicap or advanced. Many of the players now competing in the various leagues in the Northwest Federation started their competitive croquet at the club championships and have gone on to become regular tournament players.