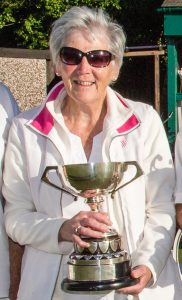 It is with great sadness, Southport & Birkdale announce Carol Lewis has passed away.  Carol has been a stalwart member at Southport for 35 years and has taught many members to play Croquet.  Carol joined the club in 1981 and has made an immense contribution to Croquet in Southport.  Her passing is a massive blow to everyone who knew her and our Croquet Club.

Carol has been on the Southport committee many times over the years taking on many roles and making valuable contributions to the club at every level.  She was an outstanding, clever and determined player who was respected wherever she played, especially in many tournaments across the UK and at one stage was honoured by being selected for an England team.

She was a stalwart member of many Southport league teams and over the years has encouraged many players into competitive Croquet.  As a Coach, Carol was outstanding, and has probably had an influence on just about everyone in the Southport Club.  Whether a Beginner or an experienced player, Carol gave her time and patience willingly.

Always cheerful, always ready to help, always able to use ‘common sense’ when problems arose, Carol was respected by everyone who knew her.  She will be greatly missed and our thoughts are with her family at this difficult time.

Carol was known throughout the Federation as an excellent player at both league and tournament events.  We send our condolences to Brian and the rest of her family at this difficult time.  The funeral will take place on Friday 26th January at 2pm at Southport Crematorium.  Family flowers only.  Donations to Cancer Research appreciated.  If attending please wear at least one coloured item.