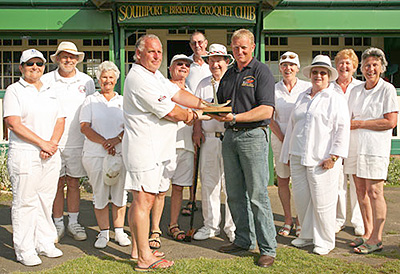 The inaugural Mexico Trophy tournament took place at Southport and Birkdale Croquet Club last Saturday, 31 May, in Victoria Park, Southport. This new Croquet tournament will be played annually between Southport and Fylde Croquet clubs, in memory of the great lifeboat disaster of 1886, when the boats of both Southport and Lytham capsized with the loss of 27 crew, whilst going to the aid of the barque Mexico. The event will raise money for lifeboat charities.

In the heat of an early summer sun, experienced players as well as beginners, rose to the occasion, closely contesting matches in Advanced, Handicap and Short croquet formats. At lunchtime with Fylde leading 9-4, players retired, appropriately, to the Fishermans Rest for lunch, (this hostelry was used as a base by the Southport Lifeboat in 1886). Suitably fortified, Southport players made an exciting comeback in the afternoon, eventually emerging victorious 20-14. 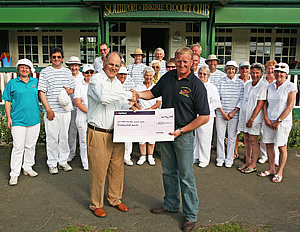 Over £500 was eventually raised for the new Southport Lifeboat House Appeal and Keith Broter, Senior Cox was presented with an interim cheque fior £300 by Southport club President Professor Alan Pidcock. The impressive Mexico Trophy (in the form of a mounted brass Anchor) was then presented to Southport captain Bob Burnett.