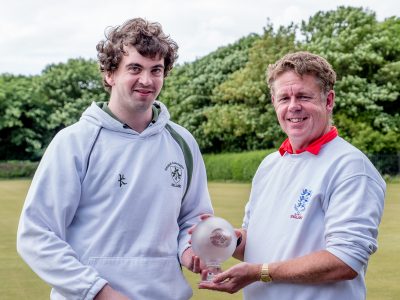 Following heavy overnight rain, the start of this year’s Irish-hosted Home Internationals at Southport was delayed due to significant puddles on all five courts. Ongoing drizzle (with intervals of heavy showers) kept them topped up, so the usual all-play-all format was amended to a knockout format. The randomly drawn semi-finals were:  England v Wales and Ireland v Scotland

Play finally got underway at 11am on court 5, with court 4 becoming available later in the day. The wet conditions made some play heavy going, with one of the first matches being an eight-hour epic, which Jane Morrison won for Ireland (-5 +13 +23). A quick 13-minute TP in the fading light by Simon Williams over Campbell Morrison (+26 +23tp) gave Ireland their test win 3-1. (Martin Murray having won the single point for Scotland). The England/Wales test was further behind, with England having an overnight 1-0 lead (Christian Carter beat Garry McElwain +18 +18tp), and only one other game completed (James Hopgood leading Chris Williams +4)

There was no further rain overnight, and Sunday morning revealed three playable courts. This was enough to start all remaining first round matches. England won all games played against Wales, to win the test 3-0. At this point (~11am), all games in play were abandoned in order to start the next round. All five courts were now playable, so all 20 players were . Courts 2 and 3 had dried sufficiently for all matches to be started.

These two matches were one-sided affairs, with Scotland and Ireland winning only three games between them before Wales and England won their matches to take 3rd and 1st place respectively. Play finished at around 5pm, as initially planned, allowing everyone to stick to their travel plans and the manager to claim that everything had been under control all along. Danny Johnston, on behalf of the Hosts, Ireland, presented the Frank Cooper trophy to England Captain, David Maugham.