You are here: Home / 2013 / Graham Good, too Good for Fylde Croquet Tournament 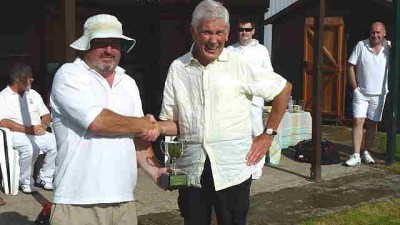 A beautiful morning, 8 Plummers, Andy got his Silver Merit Award. Blisteringly scorchio well before lunchtime. Philip misses Bronze as he looses by two. Afternoon tea cup cakes melting as it gets hotter. We are missing the storms in the South. Graham runs between long take offs like Usain Bolt, sometime arriving before the ball. What was in that fruit cake? Rossy delivers the tournament’s first twenty six nil to Andy , she had the short straw so they both finish the day on two wins. Some cool air comes in from the East. Graham, playing one ball, beats Terry to take the overnight outright lead. Three games still in play at 20:00, it is a nice evening, four players not in bare feet.

Rain throughout the night clears for the start of play with an Easterly. The washing up bowl blows away rolling on its edge down lawn 1, judging by that it looks like 8 plummers again even with the rain. One or two injuries on show this morning, some arising from doing a Usain and others from the Blackpool nightlife. It is Barret 6, Pidcock 4, Wood Mallets NZ 1 and John Beech 1 by the way.  Jet 2 takes off from Blackpool banking over the lawns, the Alecante passengers should be able to see the misplaced clip on lawn 3 from there. Opening a bottle of Willamette IPA does the trick, the first result comes in and it a win for Graham putting him in a strong position at lunch.

Graham has beaten Andy in short order with bisques to spare and attracted the eye of the tournament handicapper with his high scoring 5/5. Clinical hoop running and rushing are Grahams strong points at the moment but gets away with a suspended sentence as his tactics are, well, lazy? He comes down naturally to 14, that is ok, well played and congratulations to a rising star. Elsewhere they are settling in for the long haul match. Mini Mouse has just turned up at the Tennis Club for a photo shoot. It must be hot in that outfit. Philip is on for a Bronze again, just needs to win the game. That means the result of Joe versus Janet, which started 24 minuets late, will decide the runner up and the sky is darkening with thunder clouds in the distance. Phlip gets his Merit Award as the rain starts, sending the wedding breakfast revelers inside the Tennis Club Bar. Mini appears to have been decapitated and this seems to please most of the children as they play football with her head. Janet is two ahead time goes, Joe misses. FCC Chairman Martin Bradshaw presents the trophy. So that is it until next year, thanks for tuning in.