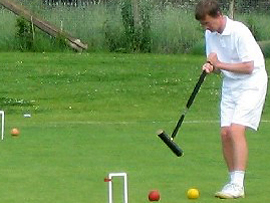 The entry of 10 players for this year’s level play Pendle and Craven Advanced Weekend showed approximations to symmetry in both latitude and handicap. Two came from Scotland, two from the South of England, and the other six from nearer at hand in the northern counties of England. (The lawns are in Lancashire, but less than half a mile from the boundary with Yorkshire – a circumstance which caused one visiting player some discomfiture in the bar on Friday night when he rashly assumed that the inn where he was staying was in Lancashire too.) Ian Lines had handicap -2, Martin Stephenson was a 5, and the rest ranged from David Barrett at 0 to Robert Essler and Fergus McInnes at 3.

The lawns, levelled and seeded in early 2005, were much improved from their “sand pit” condition of Easter 2006, but still bumpy, and, with two-hour time limits in most rounds, 77% of the games went to time. In four of the eight completed games it was Ian Lines who pegged out, and his +26TP in 62 minutes against Paul Rigge – the only triple of the tournament – easily won him the Chris Hudson Trophy for the fastest game. Peter McDermott was the only other player to win more than one game with a peg-out, while Martin Stephenson had the most peg-outs completed against him: one each by Peter, Paul and Robert.

The format was draw and process, with extra games for those knocked out of either or both – choreographed by manager Abdul Ahmad with an impressive system of colour-coded cards. Abdul was not playing, but did a good deal of refereeing as well as management, alongside the joint Tournament Referees Ian Lines and Fergus McInnes. (One interesting refereeing incident involved all three of them – Ian playing, Abdul refereeing, and Fergus shooting the video with his new digital camera. Ian played hard through hoop 3 to get close to a distant reception ball, and Abdul called a fault. Unfortunately the video was taken from too far away to yield conclusive evidence about the correctness of the decision, even when viewed in slow motion.)

Both draw and process could be completed in seven rounds if the same player won both, but otherwise an extra game would be needed. In fact Ian Lines won all his games in the Draw, and got into the final of the Process against Ian Parkinson, which he narrowly won (+2 on time) to clinch the victory without the need for a playoff. Ian Parkinson won the B-class trophy, awarded on games won and Egyptian points, and he beat Roger Schofield 1-0 in a peg shoot-out to determine the runner-up in the main event. Completing the inventory of trophies was a magnificent wooden spoon, obtained by Fergus McInnes with six losses and only one win. This too was decided by a narrow margin, as one of Fergus’s losses was a -1 in extra time against Martin Stephenson – in a game where Fergus had been 17-4 up when time was called, with Martin needing a break from hoop 2, a peel at hoop 4 and a one-ball peg-out to equalise. Had that game gone the other way, the spoon would have gone to Graham Brightwell.

It only remains to mention the weather (hot), the club’s facilities (very nice apart from the bumpy lawns – which should improve in time) and the catering (provided in excellent quality and overwhelming quantity by Barbara and Julie on Saturday and by Kathryn and Charlotte on Sunday apparently competing in a vain attempt to fatten up the Tournament Referees). Altogether it was a most enjoyable weekend, and I certainly intend to take part again in 2007, though on the principle of playing to win I must reluctantly abjure the defence of my wooden spoon.