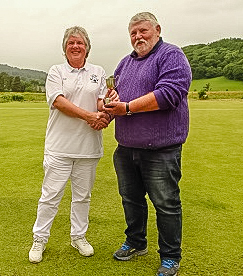 The tournament started in driving rain but Liz Wilson put together a controlled 9-12-5 to start with a win. Liz Wilson stormed through five unbeaten games, brushing aside all opposition and water by the hoops, yes folks, it did rain a little, but the lawns were extremely well prepared and fine to play on, they held up well.  A  lawn was briefly lost to puddling while the heavy rain continued. The drainage was coping on the others.  More fine Croquet from Liz, hardly a hoop missed all day.

On a dry Sunday morning the beautiful lawns revealed their true colours by playing smooth and fast. Liz’s game became a three ball, became a two ball and the game was won +1. She concluded with a 8-12-6 in the afternoon.

There was trouble at mill for one player, forcing withdrawal, leading to an incomplete block. But with 5/5 Liz was unanimously declared the winner by the manager, Dave Nicholson and all those present.