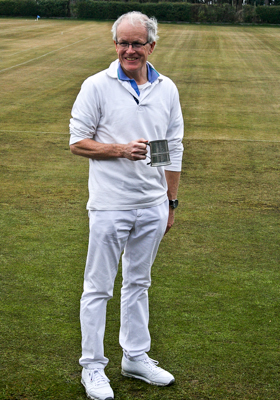 In spite of a dreadful winter, Southport croquet lawns are in superb condition thanks to the efforts of members and this weekend they were the setting for the first big tournament of the year.  Expert players came from the whole British Isles to take part, from as far as Wales, Scotland, Ireland and Cornwall, bringing very entertaining play of a very high standard to the club.  The event was managed by James Hawkins.

The Jubilee Cup was won by Mark Ormerod of Dulwich and runner up was Keith Aiton of Nottingham.

Mark Ormerod had recovered from a game down to beat Edinburgh’s James Hopgood in the semis, earning his place against Great Britain Captain, Keith Aiton, in the final.  Keith had shown impressive form in the earlier rounds, but Mark stole the first game by a single point, and shut Keith out for most of the second game to win th