You are here: Home / 2007 / Millennium Handicap at Chester 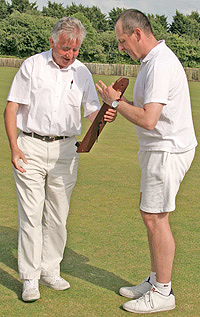 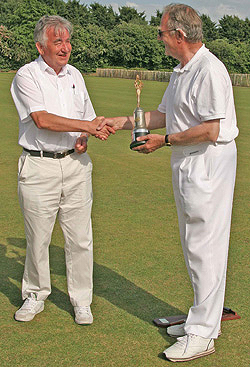 Last weekend Chester Croquet Club hosted the annual North West Millennium Handicap Tournament at Westminster Park. This was the second time that Chester has hosted the event. Thirteen players from five North West clubs, Bowdon, Bury, Chester, Fylde and Southport, took part in the competition. Each participant played three 3 hour full lawn matches on Saturday and two 3 hour matches on Sunday. After a grey, chilly and blustery start on Saturday morning the weather improved during the afternoon and evening and playing conditions on Sunday were ideal.

Three competitors won four out their five matches and the final result was determined on points. Justin Brightmore of Bury, playing off a handicap of 12, achieved first place and David Guyton of Chester, with a handicap of 14, came second. Barry Keen, Chairman of the North West Regional Federation of the Croquet Association, presented the awards at the end of the tournament. He complimented the winners and Chester Croquet Club for hosting the event and contrasted the pleasant conditions this year with the cancellation caused by heavy rain last year.