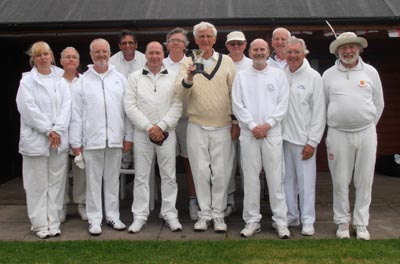 Member Paul Rigge, as Manager and this year, Captain of the NW Federation team, took control and led this year’s squad out at Pendle (after setting the hoops in the only rain we had all day).    This match is the last remaining fixture from the old Confederation of Northern Clubs (under Mike Evans), and as such, is always played in great spirit and this year wasn’t an exception – good fun was had.

The North East team, lead by Charles Waterfield carried the day 6-3 and retained the trophy for the fourth successive time, despite Lancashire being marginally stronger on paper.    By lunch we were 1-2 down after the 3hr morning doubles, and Pendle’s fayre failed to reverse our fortunes in the single matches after the break.

Worth noting this year – for the first time ever, nearly all the games were played (bar one) under advanced rules and only Bury members won games.