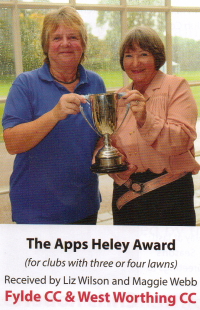 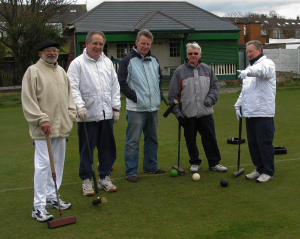 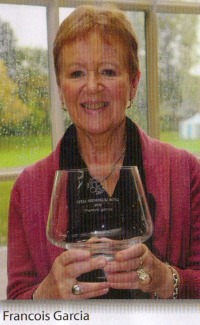 An excellent attendance of 47 people descended on Culcheth for the Federation AGM last Saturday.  Chair, Liz Wilson and Secretary Paul Rigge, welcomed delegates and reported on a busy and successful croquet season.  Treasurer Bob Connop presented a healthy set of accounts and raised the question of how should we spend surplus money.

Development Officer, Janet Davies, gave her final report, having done an excellent job for five years.  Potential new croquet clubs in the pipeline could be Macclesfield, Congleton, Trinity School Carlisle, and Preston.  League Manager, Tony Thomas reported on a successful but packed season involving 180 matches in which the new league rules had worked well.  Roger Schofield described how eight coaching courses had been delivered across the Federation.  Keith Roberts described the 2013 Festival as one of the best to date.

Dates were agreed for the various Millennium tournaments, Festival and other matches.

For 2014 league play, there will be a few changes – the wrong ball law trialled in 2013 will be discontinued (proved very unpopular), calculation of doubles handicap in association play will be based on players individual indexes rather than handicaps (fairer system and details will appear on match scoresheets).  There was lots of discussion on a convoluted set of motions but it was eventually agreed the Advanced League would retain its present format but a new B Level Advanced League will be established – 3 player teams, 3 hour games, one doubles, four singles, bonus points available, doubles pairing at captains discretion, minimum individual player handicap to be ‘One’.  The League Rules for Golf Croquet need to be revised to clarify differences from the official CA rulebook (times of games, eight turn rule, etc.) – Bob Connop agreed to bring proposals to the Spring Meeting.

With time at a premium it was decided to abandon the traditional verbal reports from clubs since members can read these in the Minutes.  Whilst this was agreed it was also noted this was not satisfactory and it will be imperative this is covered appropriately at the Spring Meeting.

The Croquet Association have established a Working Party to examine the relationships between the CA and the Federations, their report is on the CA website and everyone was urged to read it since it contains some potential far reaching suggestions.  Brian Storey gave a short presentation in which he described the system being adopted by the CA to consult all members as deeply flawed.  The suggested role of Federations in future is confusing being a mix of autonomous and subservient roles.  Most controversially is a proposed system whereby all players would pay an individual levy each time they play in a Federation formal match.  There is also a more sensible proposal for increasing CA membership by scrapping individual subscriptions but raising the individual club member levy, but as always the devil will be in the detail of charges.  The CA will be holding a Conference to explain the report and listen to opinions in Huddersfield on 15 February 2014 but places are expected to be very limited.  The Federation will hold a club conference to discuss the report at Culcheth on 1st February 2014.

The next scheduled Federation Club Meeting will be in Spring at Culcheth on 8th March 2014.

The Southport team of Carol Lewis, Tony Thomas, Brian Lewis and Alan Farrell, turned out in determined mood for the Longman Cup in Surbiton.  In glorious weather, Southport fielded their squad on some of the best lawns in the country in the Semi-Finals against the pride of Midlands croquet – Nottingham.  This proved to be a tough match with every game hard fought.  In a closely played doubles game, Carol and Brian Lewis just lost out to a very good Nottingham pair, whilst on the other lawn, Alan Farrell played with amazing skill for the first Southport win of the match.  Tony Thomas felt the full power of the opposition, falling behind early, to thankfully claw his way back into the game to give Southport another win by plus one on time.  Lunchtime score Nottingham 1 Southport 2.  In the afternoon singles games, Brian Lewis failed to contain his Nottingham opponent as the sides drew level 2-2.  But Tony Thomas had a good win to restore Southport’s lead at 3-2.  The remaining singles games were nail biting affairs with players giving their all and no one could sustain any advantage.  But with time running out, Alan Farrell achieved the critical break out to produce the vital win.  Meanwhile Carol Lewis with almost the last turn of her game came from behind to secure another glorious victory.  Final score a flattering 5-2 win for Southport against excellent opponents, putting Southport into the Longman Cup final.

With high hopes Southport took to the lawns again on Sunday to play Woking in the final.  Woking surprised Southport with their strength and skilled play, being a team of experience and rising stars.  Despite Southport playing good croquet, the talent of the Southerners showed.  With Tony facing an opponent with over eleven bisques, Carol and Brian facing a strong doubles pair, only Alan Farrell could salvage a win in the morning session and Woking secured a 2-1 lunchtime lead.  Southport discussed tactics over lunch and felt the match could still be turned around. But this was not to be, as Woking turned up the pressure in the afternoon with formidable croquet, which Southport could not counter and failed to secure a further win.  Final score: Woking 6 Southport 1 – a deserved win for a superb Woking team. A big disappointment to Southport but there was still the pride of reaching a national final, and receiving a trophy for being runners up.