Another fine November day as the delegates assembled from far and wide for the Federation AGM at Culcheth Croquet Club.  Liz Wilson, chairing her last meeting warmly welcomed everyone and the meeting flowed smoothly and efficiently to an early finish.  Thank you Liz for your time as Chairman – your skills and dedication have led the Federation through a very successful period.

Treasurer Bob Connop presented a healthy set of accounts and it was commented that our latest asset – a digital projector – is a valuable addition to our training programme.  Development Officer described the latest coaching initiatives – pods for A class players – as a great success and now considering a programme of two hour pod sessions for B and C class players for 2015.  Child Protection Officer, Jean Hargreaves, informed the meeting her title has now changed to Safeguarding Officer and clubs should adapt their processes accordingly.

League Manager, Tony Thomas, reported another successful and busy season of 170 matches and trophies were awarded to seven representatives of the title winning clubs.  The B League is desperately in need of a new trophy to replace the Glass Jug – can anyone help?  There was an interesting discussion on Handicap Cards and it was decided players must present their cards at league matches.  In cases where this does not happen, opposing captains can contact the League Manager who will seek confirmation of handicaps from clubs and can then retrospectively adjust match results if wrong handicaps have been used.

There was a surprise motion about removal of Bonus Points in the Advanced League (this year, one team were undefeated all season but still only came second in the league) – clubs requested more time to consider this and there will be a postal vote before the end of November to decide the issue.

Paul Rigge reported a great success for a North West representative team who won the Pennine Cup in 2014 but has difficulty in raising sufficient volunteers to play in this fixture.  He now generously offers free drinks to all volunteers in 2015!  Other highlights were Bowdon Croquet Club who won the national Secretarys Shield as well as the Longman Cup.  Remarkably, Graham Good from Bury becomes the first player in history to win both the national All England Golf Croquet and Association Croquet titles in one season.

Following the CA working Party Report and regional meetings there is now an invitation for the Federation to become a member of the CA and whilst the southern Federations seem agreeable, the northern Feds still have doubts – the issue was shelved until our next meeting in March.

Dates for club tournaments and Federation Millennium competitions were agreed.  The Federation Meetings for 2015 will take place on 7th March 2015 and 7 November 2015.

We welcome new Chairman, Garry Wilson from Pendle, best wishes as you lead us further into the promised croquet land.

The above is a personal view written from memory before the formal Minutes are issued. 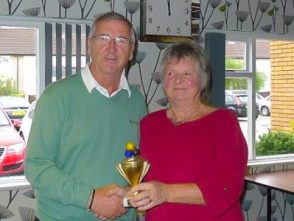 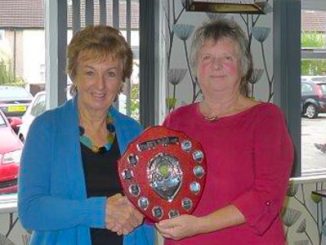 Bowdon selected 2 minus players based on the team that Oxford put out in the last round…….but their -1 player had now graduated and left university so, for a while we wondered if we had done the right thing! Unfortunately for Oxford their fourth player phoned in sick and they couldn’t get a replacement in time to play.

Bowdon played Oxford University in the final of the Secretary’s Shield on a bright sunny day at Nottingham. Bowdon conceeded bisques, having two -1s in their side, but started 2-0 up, as one of the Oxford players had fallen ill the previous day and was unable to travel.

Oxford won the doubles in 50 minutes, so the top singles started before lunch. Jordan beat Alan +14 to level the match, but Graham beat Mark to give Bowdon a 3-2 lead at lunch.

Shortly after the repast, Ken beat Ian to decide the match, leaving Adam and Mark still in play, in a game that provided plenty of spectator interest. Adam took his first ball, Black, to peg, potentially earning a CA Silver Award, but Mark then got Red round and pegged Black out, leaving Yellow for 5 and Blue for 2. Mark made more progress in the end-game, getting to 4-Back before taking a rather adventurous line of play which let Adam in. Adam played a 3-ball break with the pioneers well inside the rectangle formed by the corner hoops, but eventually missed the return roquet after 4-Back. Mark ran 4-Back himself, but left Adam too many shots while attempting to get position for penult. Adam hit and finished, to claim his award and give Bowdon the satisfaction of wining the majority of the games played.