You are here: Home / 2015 / Graham Good Wins B Level Golf Croquet down South 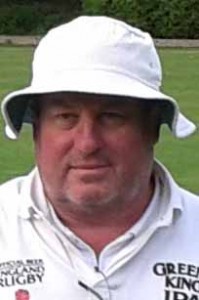 This is proving to be a popular tournament and was oversubscribed within days, aided no doubt by the club’s inclusion in the CA’s online entry system. The 16 players were divided into four blocks and after playing each other within the block the winners and runners-up from each block played a further round to leave two rounds of a knock-out to establish the winner.

Unfortunately manager Richard Keighley’s knee played up to such an extent that he was forced to leave the field during the afternoon, and it was by great good fortune that his wife Jean, who had volunteered to do the catering, happened to be there. We hope he recovers in time to enjoy his holiday.

The winner was Graham Good, who earned a handicap reduction from 3 to 2.