Tournament novice Matt Holmes won the John Beech Memorial Easter Tournament. Matt, a young player from Bury, arrived with a handicap of 14, and took the Overall Winner trophy. He was also awarded a silver medal for running 12 consecutive hoops in a game which he won. Twelve contenders took part over the four days to win one of the five trophies on offer.

Local man Roger Schofield battled hard to beat Roger Staples from Middlesborough to take the Low Handicap trophy, only to find he was in a shoot out for trophy with level score with David Turner from Tyneside. They tossed a coin for which side to shoot from and unfortunately Roger lost out to David.

Joe Lennon from Glasgow took the High Handicap trophy. Liz Wilson of Fylde and Pendle took the Fastest Game trophy in just 48 minutes. Playing time is up to 3 hours 30 mins for each game. James Hopgood (Edinburgh) and Peter Wilson (Fylde & Pendle) shared the Most Games Played trophy, getting in 12 each over the four days.

The weather was mixed but mostly kind and players contended well with the odd puddle, unlike the member who drove onto the green car park and became bogged down and remained so in spite of several efforts to free him. Croquet whites do not go well with mud splatter, rendering those players, who offered to push, to a semblance of monochrome Jackson Pollock’s. 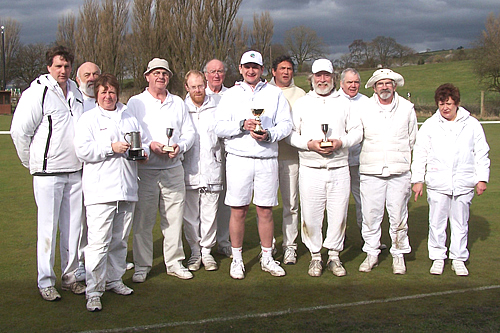