Competitors came from all over the country to take part and enjoyed the weather and the catering, although the lawns proved a challenge having dried out considerably making conditions tricky. The normally reliable Pennine overhead sprinkler system functioned only briefly on Thursday morning. The lawns were hard, bumpy in places and rather two-paced; an inadvertant jump shot over the object ball in a dolly rush was achieved on numerous occasions. Nevertheless it was possible to play some good croquet; Andrew Webb (Pendle and Fylde) achieved his silver merit award, and Janet Davies (Chester) won the prize for the fastest pegged-out game with one hour and seven minutes.

Player of the week was Roger Staples (Middlesbrough). He topped the Egyptian leaderboard by a good margin, won the “B” class trophy after a three-way play-off, and received the prize for the most games played (12). Andrew Webb from Fylde was Overall runner up. Neil Kellett (Cheltenham) won his first ever tournament trophy with a clean sweep in the “C” class. Bryan Saddington (Hunstanton) won the “A” class, beating lower handicapped players on the way. John Filsak (Pendle, managing for the first time) and Andrew Webb retained their handicap doubles title.

Jim Penny from Shrewsbury had his 84th birthday on the Wednesday, the celebrations for which may have accounted for him winning the wooden spoon. The tournament catering was very much worth turning up for, and was done largely by some of Pendle’s golf croquet playing members. 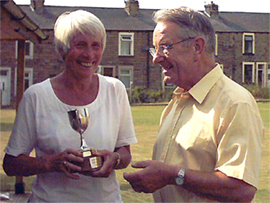 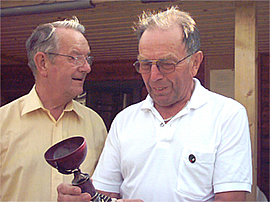 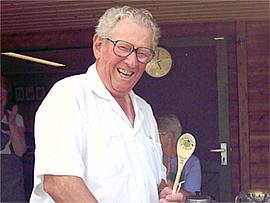