You are here: Home / 2014 / Millenium Short Croquet Trophy for Nathan

The tournament was a one day Individual singles short lawn event held on Saturday 31st May 2014 the games limited to 75 Minutes base 4. The emphasis on a friendly competition with players wearing their Fedeartion Colours.

Nathan and Steve qualified from their block with 3/3 but a shoot out at the peg for a three way tie break between Garry, Philip and Mike was required to generate the winner of block B. Garry won that. Michael Miller got the wild card into the semi finals, where Nathan beat Garry and Michael beat Steve.

The remaing players chose to settle down with a drink and cake to watch the final. Michael went to peg on the third turn with two bisques. Nathan replied by going to peg also using 2 bisques. Leaving all balls on his leave was to join on the west boundary with Michael in corners 3 and 4. With two bisques standing Michael shot and hit. He needed a bisque to get hoop 3 but then had the misfortune to miss a roquet, sending his ball, isolated in corner 1. With not much choice he took his last bisque from there but missed. Nathan then set off on his all round break and peg out to win. 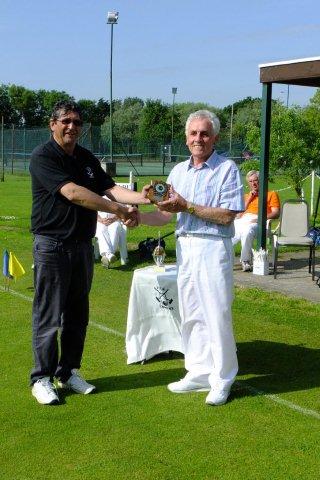 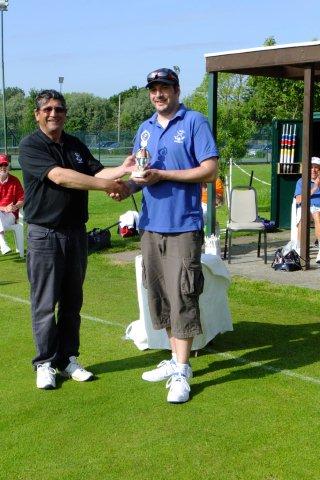