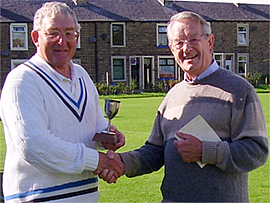 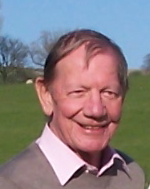 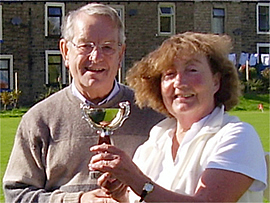 Short showers over the three day period didn’t mar play. The lawns had improved immensely since the Easter Tournament. Fourteen competitors battled it out for the honours, travelling from Horsham, Shrewsbury, Wrest Bank and more locally the Fylde and of course Pendle.

The Overall Winner was Peter Dowdall, the Pendle & Craven Club Treasurer. Alice Fleck won the prize for the fastest game and also took part in the longest at 5hr 30mins. Alice had such a good time she has decided to join Pendle & Craven as a Far Country member for the 2007 season. David Gillett from Horsham took the Low Handicap prize for the second year running and Robin Delves from Pendle the High Handicap cup. Robert Dodds from Shrewsbury played the most games (10). Handicap changes were: Peter Dowdall 11 to 10; Andrew Webb (Fylde) 8 to 7; Robin Delves 12 to 11.

The Manager Peter Wilson was thanked for his splendid efforts at keeping the game flowing, the caterers as ever were thanked for their best attempts at sending players home heavier than they came and also thanks to all those who made the lawns a pleasure to play on.