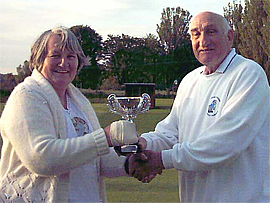 The Advanced ‘B’ Class Tournament was held over two days, 19/20 May. The weather was kind and the lawns played well.