David Maugham won the North of England Championship at Bowdon, beating Mark Suter +20tp, +14tp, +5tp in the final. Full results are on Croquet Scores and in the Rankings.

The field of 16 included 15 minus players, 7 of whom were -2 handicaps or better, and the hoops were all set to just under 1/32″ in averagely firm ground. The weather was fine all weekend.

The first round went with seeding, as did the second (except for David Maugham beating Mark Avery), but in the semis Mark Suter beat James Death and David Maugham beat Alan Giraud – both in 3 straight games. In the final David shot well and made very few errors, so despite Mark playing well David was able to win 3-0.

A highlight of the event was James Death completing 7 peels of a nontuple against Michael Sandler – with the straight penult peel bouncing out (from about 9 feet slightly angled). Quite an achievement given the tight hoops. Surely someone will soon be the first to achieve this feat in a ranking game. Also of note was Alain Giraud’s 2nd ever sextuple – the only one in the event.

In the plate knockout, Ian Lines unexpectedly won +1 from 4 v 4 back after Sam Murray pegged out two balls, and then Ian beat James Death +26tp 7th turn in the final.

On the Saturday evening everyone enjoyed fish and chips at the club, and on Sunday there was an excellent dinner at the Griffin to celebrate Alison’s birthday.

The trophies were presented by Bowdon Club President Brian Storey, and thanks were giving to Bowdon for hosting the event in these difficult times and to Alan Mayne for preparing the top quality lawns and for setting the hoops so well.

Sixteen keen players made their way to Bowdon for the June Advanced Weekend, which usually doesn’t generate too many surprises, with 8 players seeded – but things were rather different in 2014. Over dinner on the Friday night, Debbie raised a toast to her table, hoping that the four of them would be the semi-finalists. By tea time the next day David Maugham, James Hopgood and Ian Lines had all told her never to make such a toast again. The first to drop was Dave to an in form local Barry Keen, who very nearly finished his TP before Dave had made a hoop. A three ball ending gave the audience something to watch but Dave left Barry too many shots and he eventually hit the peg to win +15. Ian followed Dave out of the main event a few minutes later, losing to a faultless Barry McKenzie (handicap 6) who said it was his best game ever. James made it to round two before he fell to a TP from David Walters, whilst Debbie was trounced by Paddy Chapman in a short 40 minutes.

Paddy continued to crunch up his opponents and beat Brian Storey in the semi-final +26tp, +26tp. Ten month old baby Oliver watched on with approval. The other semi-final was a closely fought best of 3 between David Walters and Andrew Winn – Andrew eventually winning -26tp, +25tp +17, to reach his first final of a 16 player CA knockout tournament and so win his CA Silver Medal.

It was a shame that Andrew left his ten month old son at home – if he had brought little Benji along we could have had a simultaneous match of the babies on the practice lawn whilst their fathers battled in the final. Andrew hit in well but Paddy’s defensive leaves didn’t give Andrew much to play with and Paddy won in three straight games +25tp, +17tp, +20tp to retain the title for the 4th year in succession.

The Plate event, which was a little stronger than usual, was contested in the super-advanced final between James Hopgood and David Maugham. James got to 1 back early, but Dave got in and almost finished an sxp, before eventually winning +20.

Other games of interest in the Plate included Barry Keen’s error free 10th turn +17 win against Ian Lines, and Mark Ormerod completing his first tpo for 34? years – which unfortunately turned into an otp after a slight mishap at 4 back on a three ball break to win. Mark also almost beat Dave after starting on hoop 1 v 1 back in a 2 ball endgame, just losing -3tpo.

Our thanks to the Bowdon club for their terrific hosting of the event: good lawns, dry sunny weather and really superb catering. 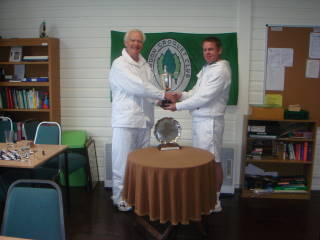