The annual Federation Millennium competition was hosted this year by Bury at Heaton Park. Geoff Young managed the event. Only Fourteen players were sent this year by their clubs to compete for the Federation’s only advanced tournament of the year. The Cup was played as a flexible swiss with David Walters displaying total dominance. The Trophy was won by Roger Schofield again, he last held it three years ago.The weather forecast for the weekend was dire but day one remained dry and calm, and only a single cloudburst on Sunday morning tried to spoil the enjoyment causing lawn one to flood for a couple of hours, solution – all retire to club house to eat Liz’s birthday cake(s) and don tutus. High jinx in the hut during a cloud burst that submerged lawn one and left large puddles on two.Luckily, Liz had lots of birthday cake (I did ask how old she was but she answered in croquet scores!).You’ll need to buy one of those present a drink to get any details about the dress or the special award given to Dennis! Fun was had all weekend and we hoped Liz had a Happy Birthday. 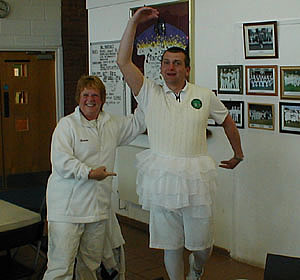