You are here: Home / 2010 / Successful Millennium Handicap at Chester

Chester Croquet Club hosted the annual North West Millennium Handicap Tournament in Westminster Park. This was the fourth time the event has been held in Chester. Eighteen players from six North West clubs – Bowdon, Bury, Chester, Fylde, Pendle & Craven, and Southport – took part in the competition. Each participant played three three-hour full lawn matches on Saturday followed by two three-hour matches on Sunday. With a 9.30 am start on both days, this makes it quite a gruelling event particularly for those having to travel some distance to Chester. In contrast to heavy rain and blustery winds in previous years, this year’s tournament enjoyed good playing conditions and mostly sunny weather though for much of the time there was a distinctly chilly westerly breeze.

The overall winner of the competition was Matt Holmes of Bury who succeeded in winning all five of his games. Two others managed to win four of their five games and the runner up was determined on points with second place going to David Holland of Bowdon. The losing finalist was David Boyd of Chester.

The event was organised by the Secretary of Chester Croquet Club, Janet Davies, another member of the club, Elmyr Hughes, managed the competition over the two days. David Guyton, the Chairman of Chester Croquet Club, thanked all the participants and members of the club who helped with the catering and organising the event and presented trophies to the winner and runner up at the end of the tournament on Sunday afternoon. 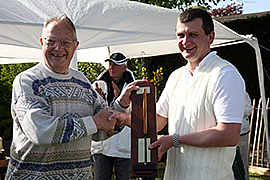 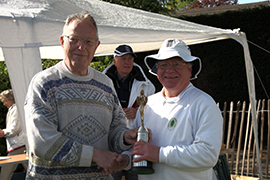