You are here: Home / 2013 / The Burridge Charity Croquet Tour in the North West

You can still support this excellent cause – just go to – www.justgiving.com/croquettour

Croquet at 21 clubs – raises thousands for Leukemia and Lymphona Research

Ian Burridge and his son, Euan, are raising funds in aid of Leukaemia and Lymphoma research by touring croquet at 21 clubs in five days – clubs selected were those who have hosted CA Selection ‘Eights’ events.

For the record, Paul Rigge (0) played Ian (0) and Harry Anderton (10) played Euan (10), with both Bury Club members winning their games against the visitors but the real winner on the day was of course the LLR charity with the tour so far raising a sum in excess of £4800.

Following the first day’s play of the June Advanced Weekend on Saturday (1/6/13), Nottingham members Ian Burridge and his son Euan visited Bowdon as part of their plan to play a game of Golf Croquet at 21 clubs in 5 days in aid of the Leukaemia and Lymphoma Research charity.   To support this worthy cause there was a fish supper at the club with profits going to the charity.

Ian Burridge and his son Euan travelled to Earby as part of their 22 club challenge to raise money for Leukemia and Lymphoma research. They have almost reached their £5000 target and pendle & Craven were their 20th club visited in the 5 days, with one more before their home club of Nottingham.

Ian is the current Treasurer of the World croquet Federation and a member of Great Britain’s test team. He plays off scratch so had to give home player Geoff Whitaker 7 bisques. Geoff put up a good effort but Ian beat him 7 -4. Maureen Whitaker played on level terms with Euan (11) but managed to beat him 7-1. Euan had won 8 games previously which is a splendid effort for such a young player. 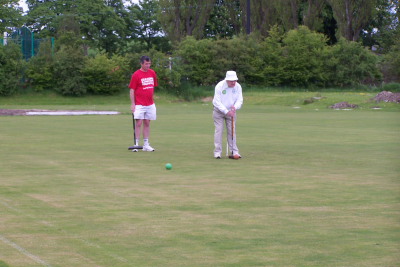 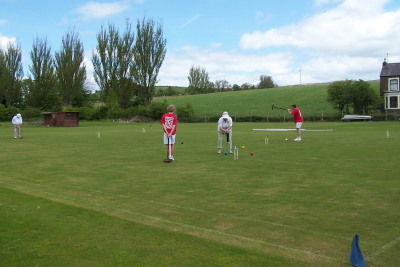 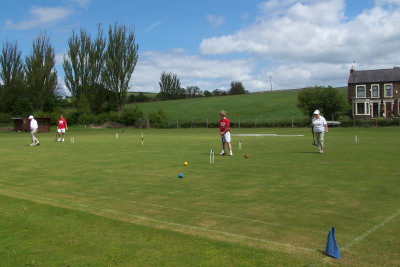 You can still support this excellent cause – just go to – www.justgiving.com/croquettour