You are here: Home / 2009 / Wonderful new Clubhouse for Llanfairfechan 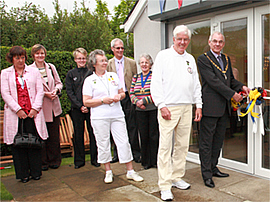 On 20th May 2009 in front of an enthusiastic crowd of almost ninety people was staged the final act of our three year project with the opening by Councillor Glyn Jones Chairman of Conwy County Borough Council of our new Clubhouse. The building looked magnificent with its off-white walls and Welsh slate roof decorated by a garland of bunting in Croquet colours. The final landscaping of the lawns and garden with the mountains rearing behind added hugely to the picture. 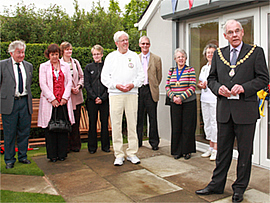 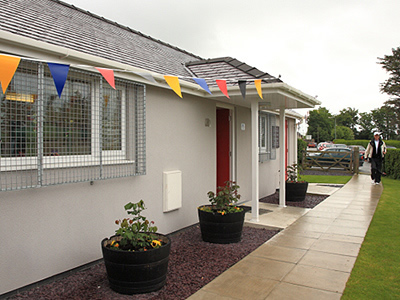 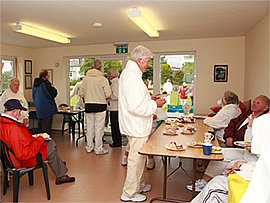 The ceremony was preceded by lunch in the clubhouse to which representatives of our principal backers were invited which enabled the Chairman to thank each one on behalf of the club for their support which had made the building possible. Before sitting down to dine Councillor Jones unveiled a plaque on the wall commemorating all those bodies and persons who had supported the project.

At 2.00pm we moved outside for the opening ceremony in front of another seventy guests – club members, dignitaries from local councils, members of other clubs in the North West Fed., members of local groups and schools who use the lawns during the summer and individual members of the North Wales community. It was an opportunity for the Chairman to extend thanks to everyone who by their contributions had added so significantly to the money raised to cover the cost of the project.

Councillor Jones was fulsome in his praise for the hard work undertaken to make the project a success and declared the building open by cutting the tape across the patio doors.

This was not quite the end of the ceremony as Barry Keen, representing the Croquet Association, to the delight of members , presented the Chairman with the Townsend Award for the most improved club in the form of a Cup, an Award and a cheque for £250!

Tea and refreshments were served at 3.00pm and all present were invited to enjoy a game on the lawns which many took advantage of.

The event was well covered by the media. It started with a Radio interview on Tuesday afternoon and BBC, ITV and S4C all had cameras and reporters there on the day. Interviews appeared on the respective news channels in the early evening. The local papers will run pictures and reports and a special media representative was sent by the Welsh Assembly to ensure that maximum coverage should be achieved throughout the Welsh Media. This can only be good for the future of Welsh Croquet and croquet in general. 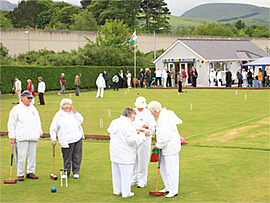 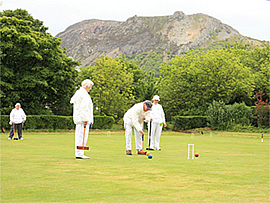