Federation Chairman David Barrett welcomed 32 people, representing 10 clubs, to the NWFCC Autumn Meeting at Culcheth last Saturday. He also thanked all the Officers and Coaches who have worked hard to make the 2009 a success. Treasurer Peter Wilson presented the audited accounts showing the Federation has a healthy balance of over £3,500. Concern was expressed about the change in Development Grant Procedures adopted by the CA this year which has reduced the expected allocation to the North West. Development Officer Janet Davies described the financial support given to clubs this year – Storage Shed at Southport; Lawn Mower at Penrith; Lawn levelling at Bury; Electricity supply at Chester. Coaching Officer, Bob Burnett described the coaching activities during the year which has covered all levels of play, all croquet formats and at many locations. He thanked all the coaches and handed the role over to Ken Cooper. There followed a discussion on whether the Federation should charge members for coaching which was resolved by a majority vote that we should continue to offer free coaching.

League Manager, Tony Thomas, reported on a successful season involving 134 league matches and thanked all the team captains for efficiency in completing all fixtures and reporting results. The changes to the league rules agreed last year were all implemented without any major problems. There was a discussion on changes for season 2010 and it was agreed: (a) to continue with the Bonus Points system in the Advanced League, (b) to place time limits of 2.5 hours on Advanced Games, (c) allow captains to agree earlier start times than 10:00 if appropriate and recommend a 9:30 start in Advance Matches. These changes to be incorporated in the League Rules, available on the Fed website. It was also agreed Llanfairfechan could play their Golf League matches as ‘Singles Only’ when playing Away but ‘Singles and Doubles’ when playing at Home.

A new Disciplinary Procedure was agreed and this to be published on the Fed website. It was accepted this was a sensible procedure to adopt, so that Officers knew how to handle the very rare but potentially difficult situations that can occur. 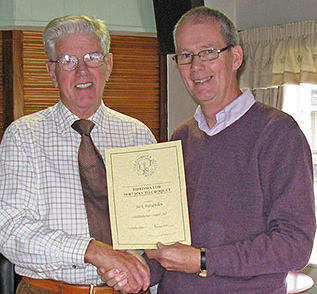 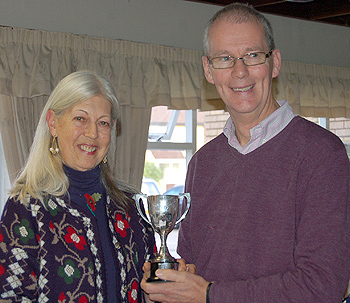 Pendle beat Ealing 5-2 in the Secretary’s Shield Final at Northampton on 18 October.

Could Pendle win this competition for the first time? It needed the players to rise at 5.30 am and to leave Robin’s at 7 am to arrive at Northampton before 10 o’clockstart. We made it with 15 minutes to spare. It was good to find we had support from Pendle’s founder and present country member, Norman Hicks, who now lives in the Northampton area.

All the games were double banked with the lawns playing fairly fast but they were undulating. In the morning Andrew built up a good lead but his opponent decided it was time to start using her bisques, so with 1.5 bisques she took her first ball round and then eventually finished the game with 2 bisques still in the ground, without Andrew adding to his score. A player to watch!

In the doubles Ealing won, so it left David to win to keep Pendle in with a chance. We ate our lunch in the open with it being such a good day. After lunch Roger set the tone with a comprehensive win using his bisques to maximum effect to win +26. David looked to be heading for 2nd win, but was finally beaten by Ealings most impressive player. So it needed Robin and Andrew to win for Pendle, to lift the shield. This they both did without much nail biting by Roger and David.

Well done Pendle and a big thank you to all the drivers especially Robin and everyone who played.

Dave Nick beat Gail Curry +17, +4 to win the Southport September Advanced Weekend and get his name on the Sandiford Salver for the first time, bringing to an end the run of 5 consecutive years that Ian Lines has won the event. Ian won the consolation Swiss with 5/6 wins.

The lawns at Southport are in good condition, thanks largely to the work that has been done on them this year, and in the sunshine today they were just fast enough (around 10 seconds) to make picking up breaks and tps a little tricky, particularly due to the slight slopes on some lawns and around some hoops, which could catch out the unwary.

In addition to the glorious sunny weather, Southport provided excellent lunches and teas which all helped make for a very enjoyable weekend.