You are here: Home / Archives for Dave Nick 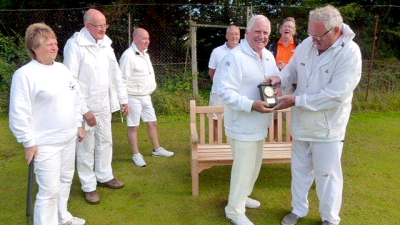 Saturday morning  the  players gathered for a weekend of competition  and anticipation     As  we sat down for  lunch the heavens opened  and not a ball was struck  in the afternoon.  Most of the competitors  retired to the Farmers Arms  at  Lowick, where  the tournament  dinner was held that evening, and yet again a  fine Meal was provided  by  Angus and  Debbie.

Sunday  brought fine weather  and a drying wind. The  lawns played as good as ever.

The  final of the event  was between  the veteran  66 year old from  Bowdon, Brian Storey  and the  shy retiring youngster from  Bury,  Paul  Rigge.  Paul progressed to the final  beating  “The  Wilsons  of  Fylde”  and  Dave Nick +24tp.  Brian  beating  Peter Wardle of Crake  Valley +26tp  in the semi final  with his second  TP  of the weekend.

The sayings: ” An old dog for a long trail,  and  experience  will beat exuberance”, certainly  held true  with Brian being the event  winner  +15.  Congratulations to Brian on his  handicap change to minus one

Immaculate-looking slowish lawns with easy hoops and occasional undulations give the advantage to the person with the innings, but many are failing to capitalise 🙂

Kibble managed two peels of an STP despite having to McCullough partner to 3-back and came to grief by running into partner whilst going to another ball after penult – the crowd were disappointed that the 8-yard Irish was not attempted but a rush taken on the other ball instead.

There was a new take on the tablecloth trick with a ball slamming into a ball box being used as a table for a glass of water. The ball cleanly removed the box and passed under the glass of water, which then landed unharmed the right way up on the grass!

SATURDAY saw the start of the air show with a visit from the Red Arrows over the lawns at midday. Then we had a Lancaster, Spitfire and Hurricane. The Vulcan bomber was majestic and even did some aerobatitics that almost rivaled the Eurofighter.

SUNDAY – interestingly, it was quieter! Lawns are speeding up a little in the sunshine and measured about 10 Plummers on Sunday morning.

MONDAY Heavy rain overnight on Sunday and drizzle Monday morning made the lawns rather slower. At lunch, manager Dave Nick said “What do donkeys on Blackpool beach get for lunch?” … “Half an hour, like you lot, so get out there and get on with it!”.

Kibble was feeling hard done by – a 2-foot cut on the DS peg ball hilled 3 inches and bounced off the peg missing to give Rigge a ball round. Then, after hitting back in and finishing three peels, a little promotion cannon to get a rush to the peg found some different paces, lumps of frog grass and stymied the rush! Rigge was brave with his choice of lift and hit with the hoop 1 ball for a finishing turn but tried 5 times to get a peel and finished 4-back and peg. Kibble missed but Rigge failed to finish, allowing Kibble to join then to peg out one, then two balls to leave penult vs. peg. Some lovely tactical play ensued with Rigge eventually running rover have having to jump over it to hit the peg or the ball behind the peg. Unfortunately his just was inches short and Kibble pegged out to get the +1 missing score in the set.

Dave Nick is proud of playing with black and blue all tournament.

TUESDAY The lawns were flooded on Tuesday morning so play started on the north lawns (in the cage), which were hastily cut and prepared by the hard-working grounds staff. They were slow and hilly but easy and fun.

Dave Nick won the Cavendish Clock at the Leven and Crake Valley Advanced Tournament for the first time with six wins out of six.
“The recent heatwave had taken its toll on two of the four lawns and it proved impossible to force the hoops into the parched ground”. The two lawns which were playable were measured for speed somewhere between 18 and 20 plummers! The eight hardy souls (who could not or would not be turned away) played a loosely based all-play-all with play getting underway at 1pm on Saturday afternoon.