You are here: Home / 2015 / Lancashire Lasses Score at Croquet Inter-Counties 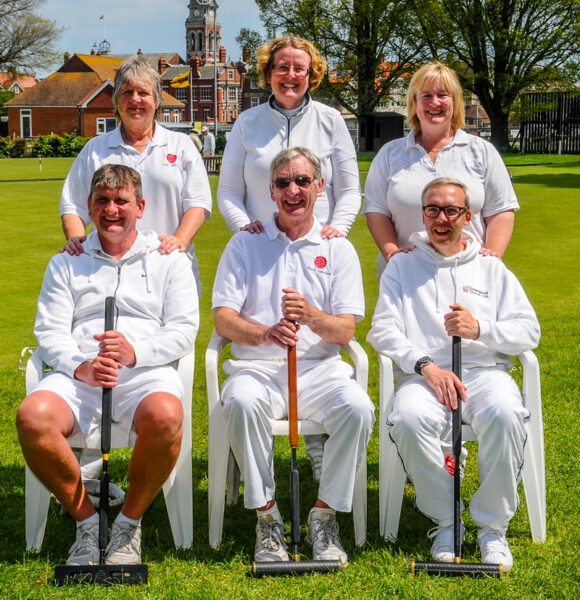 North West Players Matt Holmes, James Hawkins and Liz Wilson travelled to The South Coast to compete in this tournament.  They were joined by Lancashire born Ailsa Lines, Annabel McDiarmid and David Openshaw to form the first ever team of six comprising of three women and three men.  Paul Rigge travelled down to play for one day whilst Captain David Openshaw went AWOL to watch Burnley’s last football match in the Premier League.  Having been relegated last year the Lancashire team were keen to gain promotion and this they did in some style only narrowly losing in two of the ten matches and finishing top of Division two.  The format was advanced doubles with each match consisting of three games.  The pairings did vary but mainly Pair one was David Openshaw (ex MacRob Captain) and Matt Holmes (who is currently being mentored by David for the GB Squad), pair two Ailsa Lines and Annabel McDiarmid (not a pleasant experience for most being beaten by two “girls”) and pair three James Hawkins and Mrs Wilson.  Much bemusement at team swapping when Liz was always named as Mrs Wilson (an in joke relating to her on line poker name!)  The pairings were strong and no pairing lost more than one game – only 5 games were lost in all out of 30 played.
Post Views: 178