You are here: Home / Archives for Craig y Don 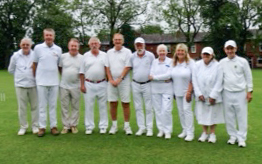 The day started fine but shortly became rather damp with the almost constant drizzle, and occasional heavy shower. The format was block play with the winners of one block playing the second place from the other block. The remaining players also had other games to play. Seventeen of the original block play of twenty games went at least to hoop eleven with three of those going to the Golden Hoop.

In Block A – Roger Edwards from Craig Y Don gained 1st place with Janet Smith from Fylde in second place.  In Block B – John Gilmartin from Bury came first with Terry Dunbar from Southport in second place.

Final: Won by Roger 7-4 whilst the play off for 3rd and 4th places was won by Jan 7-5.  Well done and Congratulations Roger.

All enjoyed the day despite the weather. Thanks to all the Bury members who helped on the day.

Craig y Don Croquet Club is a new club based in Llandudno.  The club is open from 1st April to 30 September with games played on the two crown green lawn in Queens Road.  Both Short Croquet and Golf Croquet is played.

New members are very welcome irrespective of experience or ability.  All instruction and equipment is provided.