The NW Fed Millennium Advanced was played at Heaton Park on 25-26 April 2009 under the mangement of Bury Croquet Club.

Two sections were played. The Neil Willams Trophy in the A Section of 11 players was a Flexible Swiss, won in a close contest by Ian Lines who lost only one game – this was to new face Lee Hartley of Fylde, contributing quite a bunch of index points towards his handicap reduction to scratch by making five wins out of seven. David Walters (Bowdon) also won 5/7, handicap reduction to -1, and was defeated by Ian in a decider. Paul Rigge completed the peels for a quad but couldn’t quite do the pegout.

In the B section for the Woodlands Trophy, Roger Schofield (Pendle & Craven) had a clean sweep of five out of five in a round robin, with handicap reduction to 3. 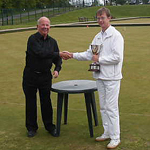 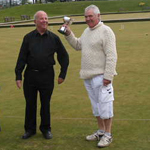