The morning was bright and sunny and the lawns had been mowed early on the same day. Our team was Lee, new member Abdul Ahmad, Betty and Ken. The morning session comprised of one doubles (Abdul and Ken – played David Turner and Nora Burbridge) and two singles matches. The morning singles finished quickly with Lee beating Sheila Watts 26 in one hour and Betty loosing to Jacob Carr a short time later. The doubles went to time with Abdul nursing Ken round to finish 9 giving Fylde a 2 -1 pokie game lead at lunch.

The Fylde lawns were proving difficult for the two Gordie ladies who struggled to hit the length of the lawn. During lunch the rain set in and made conditions difficult, particularly for the visiting team”s ladies.

After lunch Lee beat David Turner 13 in a game that could have gone either way and soon after Jacob came home a 13 winner against Ken Harper. The last two games became quite exciting as they were both very close and could go either way. Betty dug deep and produced a fine 7 win over a weary and despondent Nora. The final game was finally won by Abdul 8.

Another great success for the Federation with the 2004 Festival of Croquet hosted by Southport.

Bowdon were declared the overall champions for 2004.

Press any image to view a slideshow: 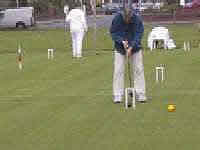 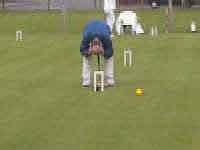